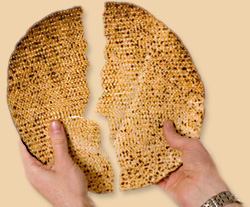 Maintaining our identity can sometimes be quite a challenge. We are challenged at work as to where our loyalties lie. Our family challenges us on the other side.  Who are we? How do we identify ourselves? Are we a nation of ethnicities or an ethnic nation? There are identities we are born with and others which we choose. Are we our work or do we work at a job? Does it have to be one or the other? And, maybe most importantly, are we in charge of our identity?

I was fascinated when I found an answer within the careful wording of the Haggadah, the main text of the Pesach Seder. In answering the 4 questions of the child, the answer begins by saying that we were slaves unto Pharaoh in Egypt. Rabbi Soloveichik points out that despite the bondage, we never lost our identity.1 There is, elsewhere, in fact, a concept of ‘Pharaoh’s slaves’, those whose identity was tied to Pharaoh. However, the Israelites never took that step – never became Pharaoh’s slaves. Rather, they were slaves who worked for Pharaoh. Though severely tested, they were still able to maintain their own identity throughout the 210 years of their sojourn in Egypt (much of which was spent as slaves). They never relinquished their identity.

Who is the person I would want to be? How would I behave differently? Do I have principles that I believe in? Will I stand up to pressure? Who am I really?

Many people living through the horrors of the Holocaust asked these questions.3 There are countless stories coming out of the Holocaust of individual courage and integrity as victims were tested and questioned: “Who are you really?”

Sometimes, specifically because of our difficulties, we can discover our true identity. Other times, it shines forth without experiencing distress. Everyone has a different path.

I worked with a female client who was not proud of the work she had chosen. She often knew that she was a good person yet could not bring herself to leave this job. In fact, she felt that she had to repress that sense of goodness in order to live with herself. This in turn caused her anguish which she also repressed and this, in turn, caused a sleep disorder and symptoms of anxiety. After hard and soul-searching work to find out who SHE really was, she re-found her identity and started listening again to its message. She then left that work. And now, her goodness is beginning to shine forth. She has become reintroduced to her identity. She never gave up her identity.

What will we have to go through to discover who we really are? Nobody knows. How will we react? I don’t know.

But one thing I do know.

We get to choose who we are.